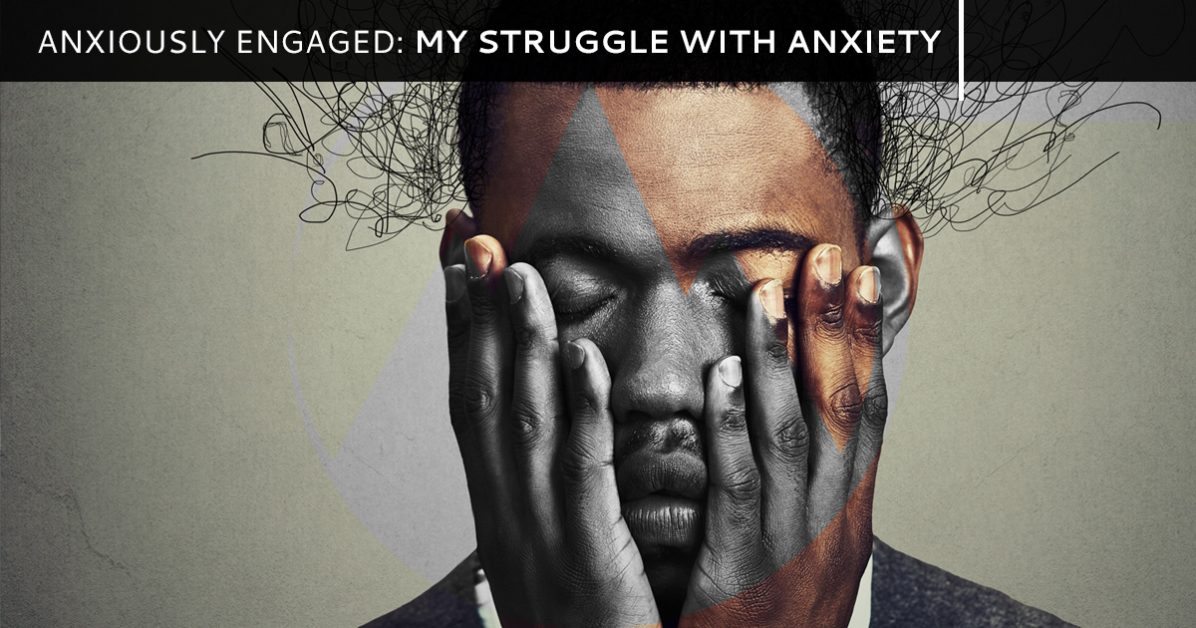 Anxiously Engaged: My Struggle with Anxiety

Anxiety is a crippling disorder, and many Americans suffer quietly without knowing that natural treatments are available. In today’s entry, Gabriel Ariciu, DC, shares a story about his personal battle with anxiety.

If you are suffering from anxiety, then schedule an appointment with Ozark Holistic Center in Fayetteville. Our holistic health center offers chiropractic treatment, nutritional counseling, and other services that can help you take the first steps toward a healthier life.

So there I was, preparing to teach a South African family about the Gospel of Jesus Christ when my hands began to shake. My mind was racing, and when I spoke, my words stumbled out of my mouth. The missionary I was with gave me an alarmed glance before taking over the teaching. We walked out of the house quietly, unsure of what was happening. It was a frightening experience.

I didn’t know what was going on. I was plagued with insomnia. I couldn’t sleep but a few minutes each night. I constantly worried. As missionaries, you are supposed to be talking to people each and every day, but we were in a tough area. Many were not interested in what we had to say, meaning that we had a lot of time on our hands — time for me to worry and feel guilty about not doing better. Thoughts swirled around and began to drown me. I was a wreck. Soon thereafter, I was diagnosed with generalized anxiety disorder (GAD).

I didn’t think I had an issue until that point. In hindsight, however, there were definite signs of my disorder creeping up. For instance, there were days when my mind would race and I couldn’t sleep, and there were some days when I experienced intense and sudden panic attacks. I remember one panic attack when I was so worried about a girl that I began to hyperventilate and experience intense sensations of paranoia and fear. I didn’t know what was going on.

In other words, suffering from anxiety is a terrifying experience. I always knew in those instances that if I could get to sleep, I would wake up feeling better. But for those who suffer from anxiety, getting a good night’s sleep is much easier said than done.

I was eventually put on medication as my GAD worsened. The doctor took a quick look at my medical history and determined that I was probably deficient in serotonin. He put me on Paxil and Xanax. Paxil, a selective serotonin reuptake inhibitor (SSRI), was to be taken daily. It essentially keeps serotonin in the brain’s synapses for longer than normal. Xanax, a benzodiazepine, was meant to be taken as needed due to its addictive qualities. It works by depressing the central nervous system, which in turn can help you calm down during an anxiety attack. However, it is easy to form a dependency when it is taken regularly.

The medication certainly did help. I was sleeping more and the anxiety was abated, but not without nasty side effects. I felt dead emotionally; almost as if my emotions were stunted. I hated how it felt. I didn’t want to be on the drugs for life, but they helped for the time being. I was still able to enjoy many great days as a missionary. In fact, some of the best moments of my missionary career happened after I began taking my medications.

I vividly recall speaking at a missionary meeting. Sometimes, you are asked to speak about a certain topic or testify about what you know to be true. Drawing from my own personal experience, I jokingly quoted a scripture that said to be “anxiously engaged.” The missionary who was with me shook his head in laughter. I was definitely anxiously engaged.

I was supposed to be in South Africa for approximately six more months after my initial diagnosis. I thought maybe once I got home I would be able to taper off of the meds, and I did. I slowly tapered, as the doctor instructed me. I was able to find good coping mechanisms that I didn’t have as a missionary halfway around the world, including movies and video games. Of course, while these may not have been the best coping mechanisms in hindsight, they worked. Soon enough, I rarely experienced anxious episodes — even when I went through some horrific personal struggles in the following years. That didn’t mean that my anxiety had vanished, however.

Fast forward a few years. I am now sitting in a functional medicine seminar listening to the lecturer talk about low neurotransmitter symptoms. He detailed out serotonin and dopamine, among other important chemicals. A light bulb suddenly turned on. I had thought that my anxiety was caused by a serotonin deficiency, when it was really caused by low dopamine.

Dopamine deficiency is characterized by the following symptoms:

I suffered from most of these symptoms. I couldn’t help but think of Michael J. Fox and other Parkinson’s patients who have lost their substantia nigra, where dopamine is produced. I correlated their tremors to my hands shaking while trying to teach in South Africa. It has never been that bad since then, but I couldn’t help but think of the tremors I once had. Now I had figured out a huge piece of the puzzle, but there was still much left to discover.

I discovered the last piece of the puzzle during my first year in practice. By this time, I was suffering from both chronic fatigue and anxiety. I stopped exercising during my doctoral program because I felt exhausted from the moment I woke up. I felt better after graduation, and I decided to go back to the gym. It felt so good! I was lifting weights, getting my heart rate up, and having fun! But after a few months, the fatigue crept back in. I started only going twice per week, then once, and then I stopped completely. Of course, during this whole period, I was consuming a lot of caffeine. I took pre-workouts before the gym, often doubling the dose. When I stopped going to the gym, I took them just because I needed the energy. Caffeine increases dopamine production, and I was hopelessly addicted to it.

I stopped working out and my symptoms improved once again. But this time, something was going to change. Dr. Quinn and I like to use ourselves to test new products and diagnostic procedures. In the process of us investigating my issues, I decided to take the DUTCH test. The DUTCH test is a dried urine test that measures the amount of hormones and neurotransmitters in the body. I was primarily wondering if I had low testosterone. The results came back with some hormones being off, but the bigger issue was that my dopamine levels were incredibly low. Neurotransmitters are notoriously difficult to measure, and most doctors rely on symptom surveys and a trial-and error-treatment process.

You could blame my years of eating poorly; they certainly didn’t help. My diet at this time was far from perfect, but it was leaps and bounds better than it had been a few years ago. But diet was not the only contributing factor.

We use a diagnostic procedure known as applied kinesiology (AK). One of the techniques we use was developed by Dr. Michael Lebowitz, and we owe him a lot for his clinical expertise. AK is not meant to be, and does not it purport to be, a 100-percent foolproof diagnostic procedure, but it is meant to be used in conjunction with blood work, physical exams, medical history, etc. It’s a guiding tool. We used Dr. Lebowitz’ protocol in conjunction with a symptom survey for Lyme disease. The survey indicated that I had a high probability of tick-borne illness. The protocol confirmed our suspicions. I most likely had Lyme.

Now, if you read my other post on Lyme disease, you know that the blood tests are terribly inaccurate and often produce false negatives. We didn’t run them, but instead proceeded with an herbal treatment regimen. Within weeks, my motivation increased, apathy waned, and I could focus again! My caffeine dependence was no more.

Lyme has been shown to decrease dopamine levels as well as testosterone levels. There is a feedback loop between dopamine and testosterone as well. Again, everything in the body is connected.

The point of this article was to talk in-depth about my own health issues and to introduce a segment about mental health. I will follow this article up with an in-depth look at anxiety and what it does to the body. I do hope that my story motivates others and provides them with the hope that things can get better.

Are you struggling with anxiety? Ozark Holistic Center provides a number of natural health services that can help you promote your well-being. Whether you need chiropractic work, nutritional counseling, or any of the other services we offer, the doors at our Fayetteville holistic health center are always open. Schedule an appointment through this page, and get in touch with us using the form below if you would like to learn more about how we can help!